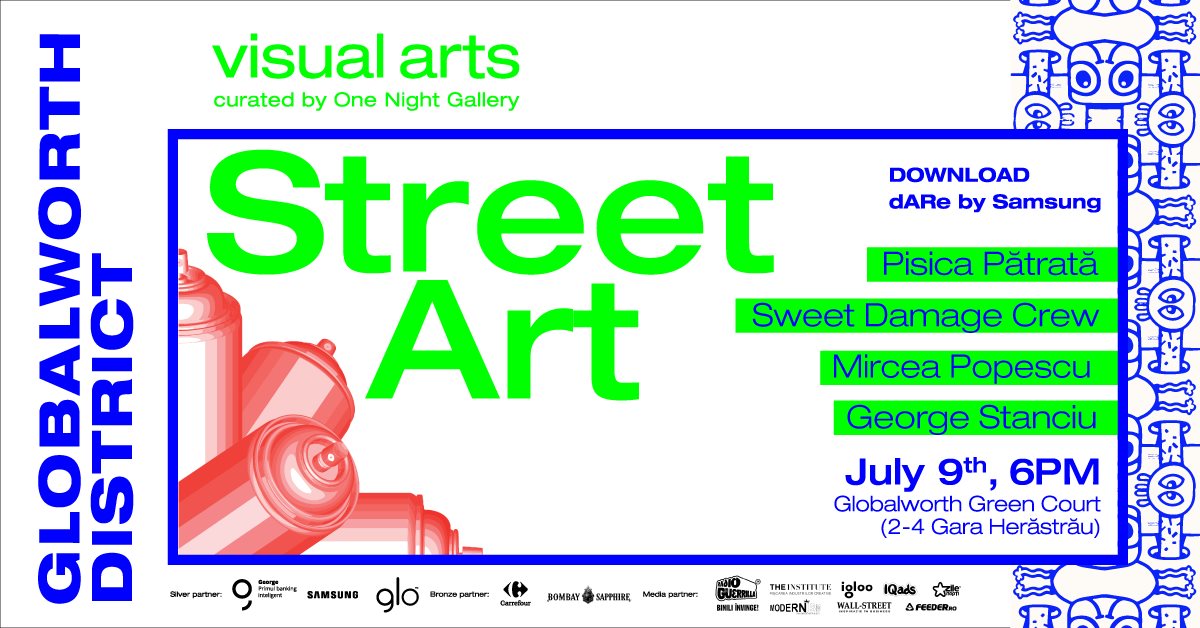 The next Globalworth District event is about bringing artists, technology and the community together once more in the Visual Arts edition. This time, we will create an outdoor exhibition that will repurpose our colorful Globalworth Green Court offices in Bucharest into the host of a collaborative STREET ART Gallery.

Pisica Patrata, Sweet Damage Crew, Mircea Popescu and George-Alexandru Stanciu will be in charge with transforming Globalworth Green Court into an interactive street art playground that can be discovered through new technologies: augmented reality with dARe by Samsung and virtual reality. The fifth artist at the event will be represented by the Globalworth community. For the first time, people working in Globalworth buildings are invited to showcase their artworks at the event in a special section.

And we invite you to be part of the game as well and become one of the creators of a collaborative artwork. Don’t miss it!

Sweet Damage Crew – a group of contemporary artists that have come together to paint cities like Bucharest, Cluj-Napoca, Sibiu, Timișoara and many others, meanwhile winning several prizes and the public’s recognition.

Pisica Pătrată – also known as Alexandru Ciubotariu, one of the first street artists in Bucharest who managed to transform public spaces into playgrounds by integrating his easily recognisable cat characters in various city landscapes.

Mircea Popescu – coming all the way from Timișoara, he will change your usual understanding of artistic genres and bring you a fresh approach to multiplying imagery in a contemporary context.

George-Alexandru Stanciu – a promising young artist that brings attention to social issues through his artworks.

Globalworth District aims to create a social context for the 100,000 people that work in the Globalworth offices to network and share ideas in an art&tech atmosphere right after work. Colorful set-ups, oversized characters and a dialog between street artists, the Globalworth community and people fond of art and technology is what you will discover at the new Globalworth District edition – a cultural initiative launched by Globalworth and curated by One Night Gallery that promotes Romanian art through emerging technologies. Powered also by Samsung, George. The first intelligent banking. An innovation by BCR, Carrefour, @Glo and Bömbaysapphire.
Media partners: RADIO GUERRILLA, Wall-Street.ro, Zile si Nopti Bucuresti, Igloo media, IQads, FEEDER.ro, Modernism Punct Ro, The Institute.

Globalworth is the largest office investor in Romania and Poland, with state-of-the-art office buildings as well as logistics/light industrial and mixed-use projects. The company created Globalworth District, an initiative dedicated to the community in its offices and as a promise to the city is part of, to build this new cultural hub in order to promote artists from the young generation.

*To promote Globalworth District |Visual Arts edition and our partners, at the event, we are going to take pictures, video and audio recordings that might also include your voice or image. Attending the event represents your approval to use these visual and audio materials on our social media platforms – Globalworth and One Night Gallery (Facebook, Instagram and LinkedIn) and on our partners’ channels. The materials will be used until the goal is reached. Also, the materials are going to stay on social media and not going to be deleted as they are used to promote Globalworth, One Night Gallery and our partners.